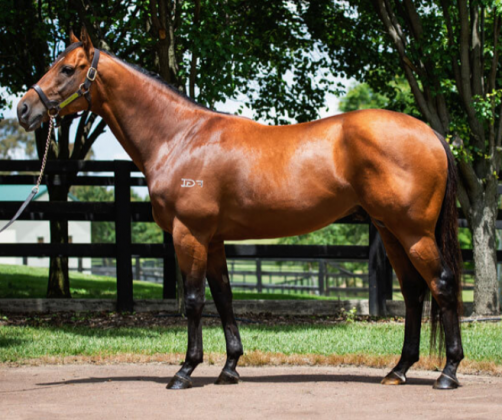 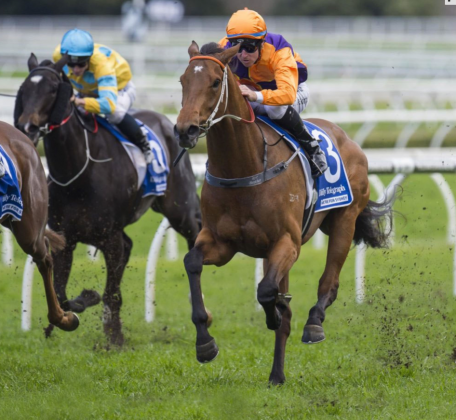 By the legendary REDOUTE’S CHOICE, Australia’s preeminent sire of sires

Won the Ming Dynasty H. [G3] at Randwick in his first start as a 3-year-old, a race won by the great stallion LONHRO

Debut 2-year-old winner in his only start at two

Out of dual stakes winner & champion New Zealand 2-year-old filly CROSSYOURHEART, from the family of Hong Kong Sprint G1 winner ALL THRILLS TOO and Group winners ADALINE & GOTTA HAVE HEART

“I can’t wait to get back to Spendthrift to see how Swear has let down in the off season. He is a quality individual and I am looking forward to seeing his first foals.” — David Phipps, Glenfern Park

“Swear showed us that he was a genuine Group 1 horse in the time that we had him. I just wish we had seen him as an autumn 3-year-old because who knows what he would have achieved.” — John Hawkes, Hawkes Racing

“He just feels like a really good horse. It is like being on a Ferrari.” — Tommy Berry, after winning the Ming Dynasty (Chris Roots, SMH Sept. 3, 2016)

Crosses of Northern Dancer, Nijinsky II, Ribot and Bletchingly are highlights of this young stallion’s pedigree, one which has plenty of depth with multiple strains of the prolific Torpenhow, La Troienne, Cinna, Lady Josephine and Marchetta families.

Ancestress of Nijinsky II to whom Swear is line-bred 4 X 5, the influential matriarch Torpenhow is also the fourth dam of Redoute’s Choice’s fourth dam Best In Show.

A major player in the success of Redoute’s Choice, Best In Show is one of the great modern day line-breeding subjects and one of the best ways to tap into her influence is via Last Tycoon whose sire Try My Best is Best In Show’s grandson.

There is more to like about bringing Last Tycoon strains in – that stallion’s ancestress Schiaparelli appearing in Show A Heart’s pedigree via her grandson Dogger Bank. Written Tycoon is of particular interest with his grandam bred on a Vain/Better Boy cross, the opposite to Swear’s second dam sire Centaine (this Written Tycoon/Centaine combo boasts an 88.9% strike rate).

Written Tycoon also has Noholme II (and his close relation Nearula) whilst Swear has that outstanding galloper’s full brother Todman. Look for other strains of that champion as well as his other brothers Faringdon and Shifnal.

Other strains of Torpenhow (such as through Nijinsky II’s 3/4 brother The Minstrel) are desirable as is further Best In Show; look for her in El Gran Senor, Spinning World, Xaar, Masterclass, Good Journey and Domesday.

Best In Show’s daughter Dancing Show, grandam of Redoute’s Choice, is also a worthy line-breeding subject; easily found in the Victorian broodmare population via her sons Umatilla and Hurricane Sky.

With Swear’s multiple strains of another great mare in La Troienne (Boucher, Buckpasser and Mr Busher), he is a good fit for mares by La Troienne’s descendants More Than Ready (who loves Danehill), Woodman, Don’t Say Halo and Rhythm or with mares carrying strains of Seattle Slew, Lomond and Snippets.

The Halo in More Than Ready is nice over Danehill and Northern Dancer – each of the three stallions descending from the great Almahmoud. Another Halo line horse of interest is Sunday Silence whose ancestress Cinna is also ancestress of Swear’s dam sire Show A Heart (and of Show A Heart’s dam’s grandsire Vice Regal).

Lady Josephine is a major influence in Swear’s pedigree, appearing through Jambo, Mahmoud, Coeur Volant, Nasrullah, Ardistaan, Fair Trial, Tudor Minstrel and Regal Advice. It is simply a case of the more the better for this family so look for strains of Aristophanes, Badruddin, Kalamoun, Royal Charger, Abernant, Kurdistan and Nediym (via General Nediym)… as well as the great local influence Eight Carat.

Red Ransom line mares are also of interest; like Swear he has strong Marchetta influence and he hails from the same family as Mussorgsky whose son Red Tempo is Swear’s third dam sire. Showdown (most easily found via Zeditave) is also from this family.

Bred on a Native Dancer/Ribot cross – the opposite to Danehill’s dam – Hussonet fares well with Redoute’s Choice as does Kingmambo who carries a close up strain of Graustark, full brother to Danehill’s dam sire His Majesty.

The Sir Tristram line combines well with Redoute’s Choice; most notably Military Plume, Marauding and Zabeel. The latter’s strain of Norseman is good for Swear who has Vain in his dam line – that great sprinter’s sire Wilkes being out of a half-sister to Norseman. 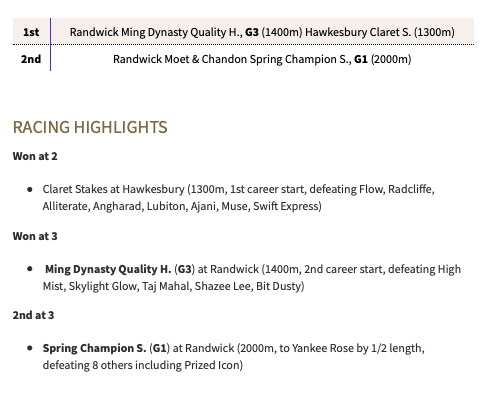