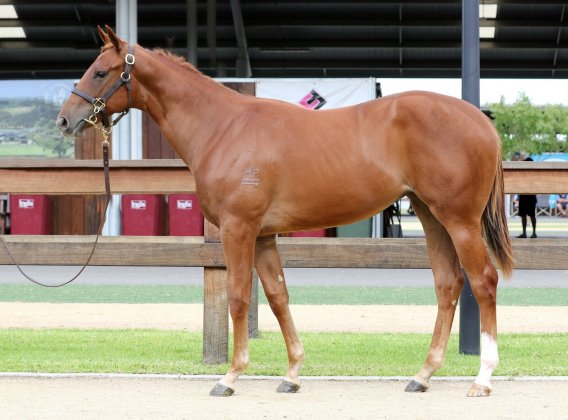 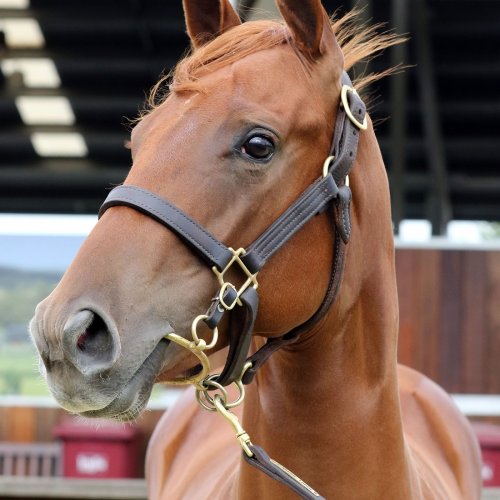 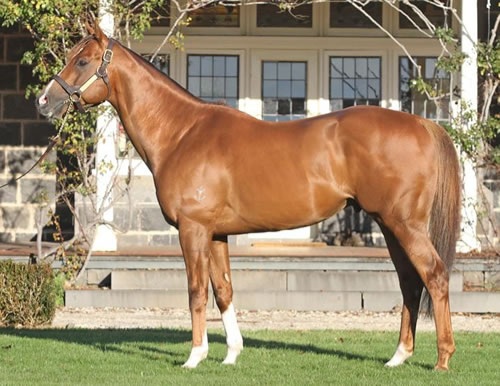 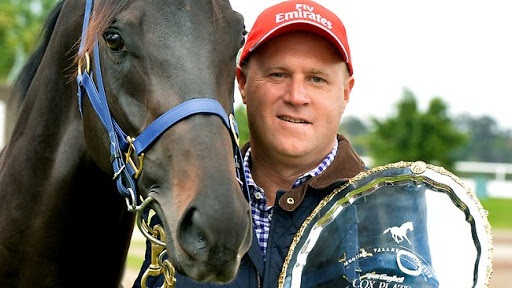 This is one beautiful chestnut filly by Starspangledbanner, purchased from the Inglis Classic Yearling Sale. Really nice filly, great moving filly that looks a real racehorse.

Danny O’Brien (Trainer) comments: I am very pleased to get the Starspangledbanner x Power Bird filly to train for Blueblood Thoroughbreds. She has a really strong pedigree. The second dam was Miss Power Bird, she was an outstanding racehorse. More importantly 2 of her daughters have thrown stakes winners already. There is no reason Power Bird could not do the same. Starspangledbanner is an elite stallion, a terrific, stakes winners to runners and runners to winners. Lovely filly in her own right, typical of a Starspangledbanner. Athletic chestnut filly. I think she has been bought typically well and I am glad she is joining our stable.

Sheamus Mills (Bloodstock Agent) comments: Lot 244 at the Sydney Classic Sale. This Starspangledbanner filly is from one of my favourite families in the studbook, Miss Power Bird, Lucky Owners, Mosheen and a very good horse Time For War. This fillies got perhaps my favourite thing to ever see on a pedigree, it’s got the double cross of the great VAIN. Plenty of good horses have carried this cross. It’s something that is really hard to find now in pedigrees and this fillies got it. Really good sort, lovely strong filly, typical of the sire who’s got a great strike rate of stakes winner to runners.

David Mourad (BBT Racing Manager) comments: Really nice Starspangledbanner filly, she’s got good size and scope about her. A lovely fluent action, inexpensive purchase here at the Classic sale. Comes from a good running family, you have Time For War, Mosheen a couple of good racehorses. She’s correct, sound, low x-rays and passed all our vet checks. Lovely filly, certainly one at a good price point. Danny O’Brien is going to train her and be given every chance. We are very excited.

She will boast the Danny O’Brien team polish, which I’m sure he will get the best out of her.

She also has a Goldmine rating of 20/20. There are 9 Individual Group 1 winners bred on the same pattern including, STARSPANGLED BANNER and PRIVATE STEER.

This filly is closely related to 17 individual black type winners including 4 at Group 1 level,  at Group 2 level and 7 at Group 3 level including MIGHT AND POWER, MOSHEEN and LUCKY OWNERS.

Our filly has also passed 100% clean on her scope, x-ray and clinical examination.

A brilliant racing career in Australia and Europe which netted four high profile Group 1 wins in the Caulfield Guineas, Oakleigh Plate, Golden Jubilee and July Cup. Starspangledbanner started his stud career in 2011 and from his first crop had 9 individual stakes winners. Starspangledbanner has enjoyed an outstanding 12 months highlighted by another Group 1 winning 2you in the UK. In Australia he sired the brilliant winner of the $2 million Inglis Millennium with Prime Star in 2020.

POWER BIRD by BEL ESPRIT. Only raced once. This is her second foal. Her first foal is a 2yo. She is the daughter of MISS POWER BIRD a 5-time winner, 1 at 2 winner of the How Now Stakes at Listed level and placed in the Yallambee Classic Group 2, Mannerism Stakes Group 3 and Let’s Elope Listed.

BEL ESPRIT broodmare sire of 3 Group 1 winners. He has had 25 individual black type winners and earnings over $43 million.

Her bloodlines are strong with Royal Academy, Nijinsky, Kaapstad and Vain

Danny O’Brien is considered one the best trainers in the land, the most recent trainer to win the Melbourne Cup with Vow and Declare. Danny O’Brien has also won some of the most prestigious races in Australia including a Cox Plate with Shamus Award, a Caulfield Cup with Master O’Reilly and a Newmarket Handicap with Shamexpress.

He enjoys travelling his horses such as his Blue Diamond winner, Star Witness, who ran placings in the King Stand Stakes and Golden Jubilee at Royal Ascot. Danny O’Brien’s first major winner was La Zoffany in 2000 and his first Group I winner was Porto Roca in the 2001 Coolmore Classic.

Not only has Danny O’Brien won nearly all the prestigious Group 1 races in Australia, he also boasts an outstanding 17.6% runners to winners strike rate.