Equestrian and the Olympics

Essence of the sport 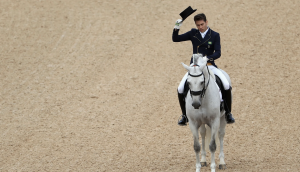 Dressage is considered the most artistic of the equestrian sports and is used as the groundwork for all other disciplines. It tests the ability of horse and athlete to display both athletic prowess and supreme elegance by evaluating, for example, an athlete’s ability to make their horse move quickly from side to side, transition into a gallop or rapidly change direction, using subtle commands.

Sixty horse and athlete combinations take part in the Olympic Dressage events with an initial qualifying competition, the FEI Grand Prix Test, selecting the best teams and individuals for their respective finals. Made up of three horse and athlete combinations, the best eight teams advance to the FEI Grand Prix Special to Music to decide the team medals. The best 18 individual combinations go on to take part in the highly anticipated FEI Grand Prix Freestyle Test to Music, for the individual honours. All Dressage competitions take place in a rectangular arena measuring 20m x 60m.

Often compared to ballet, the intense connection between the human and equine athlete is a thing of beauty to behold. But, achieving this level of unity and competing at Olympic level takes years of practice and requires consummate skill and control.

Eventing is often described as an equestrian triathlon. It is a discipline where each competition is composed of a Jumping, Dressage and Cross Country test to determine the final score, demanding considerable experience in different equestrian disciplines.

In the Cross Country test — which is unique to Eventing — approximately 40 obstacles including fences, hedges and water jumps are positioned on an undulating course. Horses and athletes cover this demanding course, which is close to 6km in length, in about 10 minutes at speeds exceeding 30kph, making for a compelling spectacle. Athletes who choose the shortest possible route may be rewarded with faster times but higher risk of failure, adding a tactical aspect to the challenge.

Jumping is a spectacular mix of courage, control and technical ability that requires the horse and athlete combinations to complete a course with 12 to 15 “knockable” obstacles laid out in a particular order. They incur penalties for each obstacle knocked down or refused, as well as time penalties for exceeding the time allowed depending on the qualifying competition.

In each competition, athletes are faced with a new and unique course, to challenge the communication and technical ability of the athlete and horse partnership. These include double and treble combinations, water features and simulated stone walls, ranging from 1.40m to 1.65m high and up to 2.2m deep. Aesthetically, the courses are also tailored to each event and often reflect local and cultural themes, leaving a memorable impression on all the fans and viewers at home.