Heard of the USA stallion Frosted? 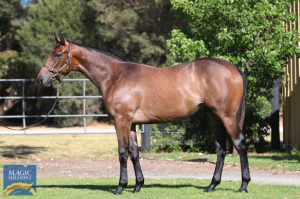 This weeks feature horse comes from the champion Frosted.

Winning families don’t come any more prolific than that of the family of this colt by US star FROSTED.

FROSTED, son of champion US stallion TAPIT, was a two-year-old winner at Aqueduct before winning the Grade 1 Wood Memorial and running second to superstar AMERICAN PHAROAH in the 2051 Kentucky Derby as a three-year-old. FROSTED was also a Grade 2 winner by five lengths in Dubai before claiming the Grade 1 Whitney Stakes as a four-year-old.

FROSTED’s progeny impressed the best judges at the maiden Magic Millions outing on the Gold Coast and this superb colt caught the eye of Mathew Ellerton, who beat off the competition to secure him for the stable.