All trainers face the issue of attracting new clients into their stable and astute Sunshine Coast trainer Stuart Kendrick has hit upon a solution to the problem with his eldest son Nathan forming the syndication business Krew Racing. 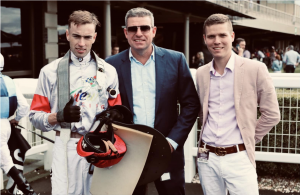 Established to bring in new owners for horses purchased from an affordable price range, Krew Racing have achieved good success since their inception last year. Zoustar gelding Plenty was an immediate success story after being purchased through Inglis Digital as a tried horse for $14,000 to join the Stuart Kendrick stable. He won three races in succession including two in Brisbane on a Saturday carrying the Krew Racing colours.

Other good winners for Krew Racing include Fort Wayne, The Stifmeister, Karbors, Bofors and exciting three year-old I’ve Bean There, who finished his two year-old season with a gallant fourth in the Group I ATC Champagne Stakes at Randwick behind star juveniles Captivant, Hilal and Converge.

I’ve Bean There did a sensational job in his first season of racing with a win and two placings from  five starts, plus a fourth and fifth netting nearly $150,000 in prizemoney for his lucky group of owners. Purchased from the Magic Millions Gold Coast March Yearling Sale for just $13,000, this talented son of Spill the Beans has more to offer as his career unfolds in Hong Kong. “We got a big offer of 900k for the horse after his Champagne Stakes run, so we took the decision to sell him to Hong Kong and we look forward to following his progress,” said Nathan Kendrick.

An impressive debut winner at the Sunshine Coast last Sunday, three year-old All Too Hard gelding Hard Reyva is another horse of great promise and was purchased for just $11,000.

Krew Racing have a beautiful All Too Hard filly bred on the same cross as Hard Reyva available right now for syndication, with some shares still available although they will not last long! 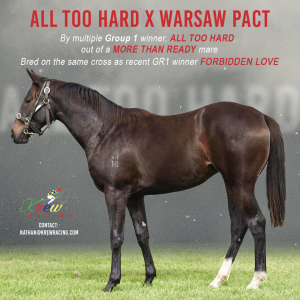