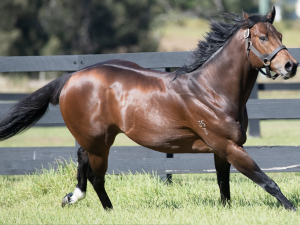 A son of the highly successful and emerging Sire of Sires in Choisir, Divine Prophet scored a career defining victory in the Group 1 Caulfield Guineas previously won by Champion Stallions Vain, Lonhro and Redoute’s Choice.

He posted a scintillating last to first victory in the Group 3 Up and Coming Stakes, a race previously won by Marscay, Snitzel, Fastnet Rock and Exceed And Excel – all of whom have gone on to become Champion Sires in Australia.

He is a full brother to Group 1 placed and Group 3 winner Proisir (now at stud in New Zealand) and is from the blue hen producer Prophet Jewel, whose 2015 filly by Exceed And Excel sold for $1.2 million at the 2017 Inglis Easter Yearling Sale.