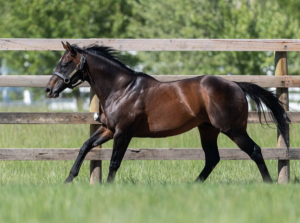 Fastnet Rock x Forest Native, by Forest Wildcat
Bay 2008 16.0 HH
With his oldest progeny only six, Fastnet Rock’s extremely talented G1-winning son Foxwedge, the Champion Second Season Sire of his year, is a stallion that has so much more to offer and with his move to Victoria, the opportunities for not only local, but international breeders, are endless.

With G1 winners in three different countries, and success in a further 21, the progeny of Foxwedge have clearly shown their global appeal through his impressive looking, precocious yearlings, who continue to train on.

James Price, CEO at Woodside Park Stud said: “Foxwedge is a G1 winner who produces impressive stock that captures buyers’ attention. Coupled with this, his ability to get stakes horses (8.3%) will ensure his stock commands not only local but international appeal”

With his yearling selling up to $560,000, 44 stakes performers internationally and his consistent fertility, all are telling factors that will continue to see Foxwedge as a successful stallion well into the future.