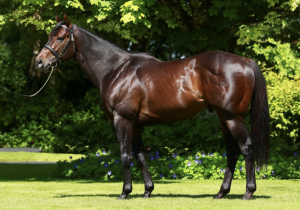 Record-breaking 2YO by top 2YO sire SCAT DADDY

“The raw talent and explosive action that wowed at the royal meeting returned with aplomb as the enormous No Nay Never upheld the excellent form of the Norfolk Stakes with the minimum of fuss.” Racing Post 19 Aug 2013

The Champion first crop sire of 2018, his top performers include…