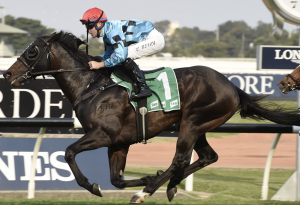 As the best son of one of the most exciting young stallions in the country from a stallion lineage of Champions, Pierata’s racetrack career, highlighted by his superior ability and fighting qualities, forms an outstanding foundation for breeders to access the exceptional son of Triple Crown winner and Champion First and Second Season Sire Pierro.

Outside of the top five only twice in his 26 career starts which netted in excess of $5.8m, another of Pierata’s undeniable highlights was his success in the Gr.3 Sydney Stakes over 1200m at Randwick, where he recorded a quicker time than Redzel achieved when winning the very next race on the card, $10m The Everest over the same distance.

A city winner and Gr.2 placed at two, Magic Millions Guineas success and runner up in the Gr.1 Randwick Guineas at three, while at four his wins in the Gr.2 Missile Stakes and Gr.3 Sydney Stakes were coupled with Gr.1 placed efforts in the VRC Sprint and the Galaxy Handicap culminating in his All Aged Stakes win and ultimately awarded a globally recognised Timeform Rating of 126.

At 5, the outstanding sprinter once again showed his blistering race sectionals to record success in Gr.2 Shorts Handicap and the Redzel Stakes before ending his career with a nose second in the Gr.1 All Aged Stakes, highlighting his sensational consistency throughout his career.