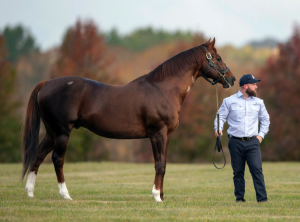 SERVICE FEE 2021
Price to be announced

Champion Victorian Stallion Written Tycoon continues to go from strength to strength with not only his progeny on the track, but his yearlings in the sale ring.

Booker, winner of the Oakleigh Plate (1100m) where she defeated a classy field including G1 winners Spright, Nature Strip and Viddora, the mare has amassed almost $850,000 in career earnings for connections in what is a testament to her ability.

Just a few months later Written Tycoon gained another G1 winner in the McEvoy trained gelding Despatch. He pinged the gates and lead at every post to hold off his rivals and bring up Written Tycoon seventh individual G1 winner.

Despatch’s win was not too dissimilar to Pippie’s 2020 Oakleigh Plate victory resulting in back to back wins for progeny of Written Tycoon in the race in what was a sizzling performance from the speedy mare. Pippie showed her elite quickness from the outset and maintained a high cruising speed to record the fastest-ever win of the race and give Written Tycoon his eighth individual G1 winner.

Written Tycoon’s pre-potency to stamp his foals in the image of himself, with the exceptional ability to produce outstanding commercial types, ensure his progeny are highly sort after by the educated and astute buying bench at all major sales.

At the 2020 Magic Millions Yearling Sale his progeny sold up to $1,500,000 and averaged $270,000. His record-breaking top lot was a filly out of Karuta Queen which had a number of great judges around the complex talking. She was the most expensive filly to go through the ring since 2018 and was the third highest price yearling of the sale overall, the demand for his progeny continues to rise.

Buyer Sheamus Mills stated, “She is outstanding. I just couldn’t fault her. I generally judge horses up to A-plus and I had to invent a new category on my scale. If I had to give something an A+++, that’s her.”

As the sire of 58 stakes performers, an impressive 73% winners to runners ratio, eight G1 winners and tremendous fertility and libido, Written Tycoon will once again stand at competitive fee for 2020.