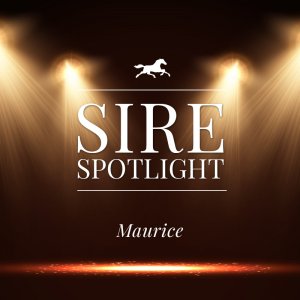 Maurice, Japan’s 2015 Horse of the Year, six-time Group 1 winner and $12 million earner is one of the all-time great racehorses to grace the turf in Asia. Now a Group 1 sire in Australia and Japan, he’s returned to Arrowfield in 2021.

Maurice is the best Japanese racehorse ever to stand at stud outside Japan, and Arrowfield is delighted to welcome him back in the wake of his eight first-crop Australian 2YO winners & 6 stakes performers.

Maurice… has been undersold by conventional measures in this year’s first season sire race. He tops the list ordered by median Timeform rating…

Named his country’s 2015 Horse of the Year, Champion Sprinter & Champion Miler, Maurice was also honoured with a 2016 Special JRA Award for three elite victories including his spectacular swansong, the Longines Hong Kong Cup G1 at Sha Tin. On the 2016 Longines World’s Best Racehorse Rankings he was awarded a figure of 127, placing him fifth overall, and third on turf in the world.

Maurice is now one of the hottest young stallions in Japan, leading the 2021 Second Season Sires’ list and commanding a fee of ~A$100,000 at Shadai Stallion Station.

Not surprisingly, Maurice’s second-crop Australian yearlings were keenly sought in 2021 with 45 of 49 lots sold across all sales for an average price of $124,000.

Maurice’s 32 second-crop yearlings have averaged almost 5 times his 2018 fee at major sales in 2021, with a top price of $540,000 paid for Arrowfield’s colt ex Only Roses bought by Suman Hedge & Clarken Racing. Most notably, all 4 of Maurice’s Inglis Easter yearlings sold, averaging $293,750.