By High Chaparral, from Breccia (by Fastnet Rock) 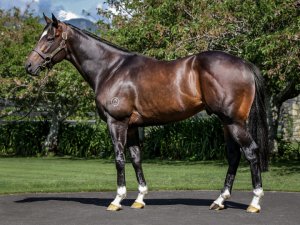 Tivaci’s first crop of yearlings caught the attention of numerous good judges, with the Book One Sale in 2020 returning an average of nearly five times his service fee. The top-priced yearling was a filly secured for $500,000 and buyers were unanimous in their assessment of Tivaci’s progeny as having size, strength and quality.

In his final campaign in Melbourne and Sydney, Tivaci raced against only the very best sprinters. His final four starts produced two wins, including his best win in the Gr.1 All Aged Stakes (1400m) at Royal Randwick, finishing his stellar career with six wins between 1000 and 1600 metres. Three of his six successes came in group races in addition to the Listed Kensington Stakes in which he ran his final 600 metres in 32.6s.

Aside from his incredible track record, Tivaci is known for his outstanding pedigree and exceptional good looks. He has let down into a magnificent stallion, standing over 16.1 hands and is showing more muscle and strength than his own sire High Chaparral who is now emerging as a highly successful sire of sires.

Tivaci’s sire High Chaparral was a world-class racehorse. He won two Breeders Cups, the English and Irish Derbys, the Irish Champion Stakes and was placed in the Prix de l’Arc de Triomphe. Although the late High Chaparral had an abbreviated stud career, he has sired over 130 stakes winners including 23 at Group One level.

The dam of Tivaci is the winning Fastnet Rock mare Breccia. His grandam Luna Tudor, by Military Plume, by Sir Tristram, won 10 races including the Gr.2 Perth Cup.

Tivaci has been incredibly well supported by breeders, covering three excellent books of mares including Group One winners Daffodil, I Do and Costume as well as the dams of Group One winners Grunt, Nicoletta, Thee Auld Floozie, Shamexpress, Ambitious Dragon, Brambles, Kawi, Stolen Dance, A Touch of Ruby and Signify.

With an impeccable pedigree and incredible racing credentials, Tivaci is poised to take his sire’s place in the stallion ranks.

Tivaci celebrated the first of his progeny to achieve a Group 1 win, when Never Been Kissed won the G1 ATC Flight Stakes on the 2nd October 2021. Never Been Kissed is from the first crop of Tivaci, and it is exciting to secure that first Group winner in just his third season as a stallion.