Amanda Turner has been associated with two of Australasia’s best mares of the past three decades, New Zealand champion Empire Rose and Australian Oaks winner Circles Of Gold whose racetrack record was only upstaged by her career as a broodmare.

Those two mares, the latter the dam of Elvstroem and Haradasun and granddam of globe-trotting star Highland Reel, would leave lasting impressions on Mandy whose formative years in the racing industry were spent with Empire Rose’s trainer Laurie Laxon and Circles Of Gold’s handler Brian Smith.

Empire Rose, of course, was the winner of the 1988 Melbourne Cup. 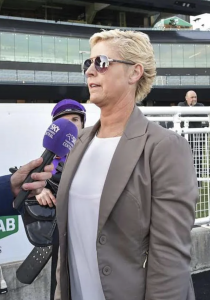 An expatriate New Zealander based in Sydney at Warwick Farm, Mandy was an equestrian rider in her homeland before working for Laxon, then one of the country’s leading trainers.

“I spent five years with Laurie Laxon before he went to Singapore. I was foreman there after about six months. I was there for a good five years and he had a lot of good horses there and about 120 in work,” Mandy said.

“It was just great to work with so many Group horses.”

It was another Kiwi trainer, the now Brisbane-based Brian Smith, that led to Mandy settling in Sydney where she has a stable close to Warwick Farm and has 20 to 25 horses in work.

“I brought horses to Sydney for Brian Smith when he was still in New Zealand.  I had left Laurie Laxon’s and went to Brian’s to work,” she said.

“When I was working for Brian at Warwick Farm, I started riding horses like Circles Of Gold who was a very good mare.  I loved it, so I never went home.”

Despite running a small stable in the competitive Sydney training scene, Mandy has managed a steading stream of metropolitan winners which includes More To Gain, a one-time Caulfield Cup hope, and more recently Lisdoonvarna, a multiple victor in the city.

Mandy who for a time trained in partnership with Mauro Poletti, has a close-knit team of riders and ground staff to help her run her stable.

From limited opportunities, Mandy has achieved much success with her stable but is looking to upgrade the quality of stock under her care.

“As a lot of people say, ‘I can’t believe you are winning those sorts of races with those horses’,” she said.

“It is a compliment to me I suppose, but I would like to have more than one Lisdoonvarna – she’s been a great mare to us.  You need those horses who are tough and can perform in town and that’s what she is.”