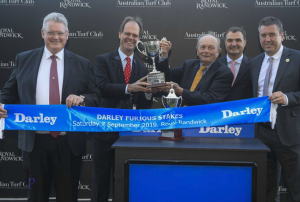 Anthony belongs to an Australian racing dynasty started by his grandfather, James Martin, and made famous by his father James Bartholomew – the cups king. As a third generation Group One trainer, Anthony is following in footsteps that have re-written Australian racing history.

Since starting his own stable in the early 1990s, Anthony has maintained the highest level of family excellence with a consistent flow of Group One winners.

Horses like Hotel Grand, Casino Prince, Duporth, Turffontein, Road To Rock and Zavite have all reached their potential under the guidance of Anthony. But there’s more to a successful racing operation than training winners and as a judge of yearling’s Anthony has developed a reputation that sets him aside from his peers.

In fact Anthony is one of the most prolific producers of stallions in Sydney, if not Australia with 9 stallions leaving the stables in the last 9 years. The likes of  Casino Prince, Hotel Grand, Duporth, Turffontein and more recently Your Song and Smart Missile.

With an eye for the future Anthony has an almost 70 percent strike-rate of winners to runners purchased at Australia’s major sales. In fact, the 2009/2010 season was his most successful to date with five Group One wins to his name and a number of placings.