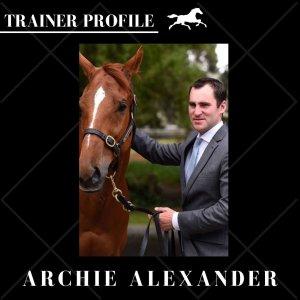 Archie’s decision to start training racehorses – in Ballarat, north west of Melbourne – came as no surprise to those that have seen him learn the craft from some of the world’s most respected and successful trainers.

As the son of Hamish Alexander, who bought Derby winner Generous as a foal and is now working with Goffs Ireland, there were plenty of sales catalogues throughout the house during his childhood and by the age of ten Archie had worked out the training life was going to be his destiny. School holidays were spent riding out for one of the true greats of the jumps game, Nicky Henderson, in Lambourn, UK.

On completing school and, wanting to broaden his horizons, Archie relocated to France to work for Alec Head at Le Quesnay before settling in Chantilly, where over the course of four years with yet another master in Criquette Head-Maarek he became her assistant trainer.

With the knowledge that experiences in a variety of racing yards are invaluable, Archie ventured to the United States to work with Todd Pletcher. As travelling foreman, his stints in Chicago, Keenland, Florida and a trip to Dubai with the World Cup runners exposed him to a completely different style of training.

From the States, Archie settled closer to home with Mark Johnston in Middleham for three years where he held the position of Yard Manager, before a position arose with Aidan O’Brien at Ballydoyle to run a fillies’ yard. Archie – still only in his mid twenties – felt working for one of the greatest racing empires was necessary; especially given that it afforded him the chance to observe the master of perfection at close quarters.

When Lloyd Williams invited him to become a foreman and take part in the training of his large European team, in Melbourne, Archie jumped at the chance. There, Archie saw Fawkner win the Caulfield Cup in the Spring of 2013 alongside a number of other major successes.

Archie made the decision to set up his stable in Ballarat for a number of key reasons. He felt the opportunities in Australia were far greater than back in England for a young trainer, a situation that remains the case to this day; racing has a much wider appeal and the the prize money on offer is far superior to any other major racing country.

Ballarat as a training centre immediately appealed to Archie as, first and foremost, Archie is a horseman, and the quiet country setting is to him, an ideal location for a horse to enjoy its life and thrive as a racehorse. This combined with the top class facilities allowed him the scope to develop his training technique using a combination of methods he has learned through his travel around the world.

Success came quickly and has not abated since, from Tyanna’s initial win in 2014 up to and through a host of major victories since, the fortunes at the yard have been spectacularly progressive and are ongoing.

Lord Fandango was an early standard-bearer in top end races, his win in the Group 2 Herbert Power Stakes another launchpad into the big and bigger time. Since then, things have snowballed, with greater experience and quality at the centre of everything within the yard. A well-oiled and extremely enthusiastic team are behind all the runners sent out, and were instrumental in the likes of Survived, a three-time winner of the Mount Gambier Cup a foremost example of the team’s ability to shine a light on every last bit of a horse’s ability.

There has also been great success with fillies along the way, with classy individuals such as Wheal Leisure, Mirette, and Gamay keeping the headline wins rolling in. Perhaps, though, it was Gallic Chieftain’s memorable win in the Chairmans Handicap at Randwick followed not too long after by a huge run in the Metropolitan there that provided most satisfaction. His story is just the latest in a long line that show the ability the team has in eking out everything from performers that comes from a wide range of backgrounds.

Ballarat is very important to us in every way, from providing a base, outstanding facilities, and exceptional support, so it was with that in mind when Kiwia landed the Ballarat Cup in November 2019, and what made it another landmark (and emotional) victory that leads the yard – and everything we do here – on towards bigger and better aspirations.