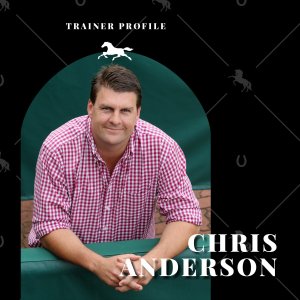 Unlike a lot of trainers who were born into the racing industry from generations of family history, Chris Anderson didn’t take up training until well into his adult life. Chris’s grandfather, uncle, and cousin, were all horse trainers, but initially, Chris decided to take a different path.

As a young man, Chris first showed his vision, and determination, when he purchased a run down, profitless pub, after many people warned him he was mad to do so. However, within a very short time frame, his dedication, and hard work had paid off, and he managed to turn the pub around completely, transforming it into a thriving business, that he later went on to sell. Later, Chris enjoyed great success as a National Sales Manager, for a leading liquor company. His corporate background had given him a solid foundation in business, and host of other invaluable skill sets, but despite all of his success, Chris knew, deep in his heart, his real passion was for training horses.

Chris’s bold move to try his hand at training, again showed his tenacity, and dedication. He learnt from a host of successful trainers, here in Queensland, interstate and overseas, and his passion for racing, and work ethic alone paved the way for his success. His late entrance into the training industry, has given him the advantage of having no preconceived ideas, or outdated family habits to shake, allowing him to focus on developing more modern, and effective training techniques.

Having grown from training one leased horse, right through to jointly operating the largest racing stable in QLD, Chris in his own right has enjoyed enormous success as a trainer, and has been entrusted to train horses for the likes of owners such as; Think Big Stud, Peter Tighe, Sir Patrick Hogan, Glenlogan Park, and Gooree Park Studs. Chris’s desire moving forwards, is to get back to his roots, and spend more one-on-one time, with his horses, and his owners.

Chris’s mission is to ensure that every one of his owners, receives a unique, and personalised experience, enjoying all the excitement, and success that racehorse ownership has to offer.