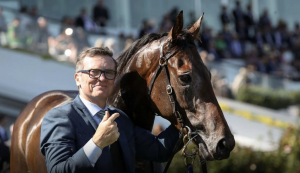 About David Vandyke
David Vandyke is a dual Group 1 winning trainer who moved from Warwick Farm, Sydney in 2016 to train on the Sunshine Coast, Queensland. After 10 years away from the training ranks, he took his licence back out in February 2010 and since then has won Stakes races with Yankee Rose, Lamasery, Arabian Gold, Maurus, Sir John Hawkwood, Look To The Stars, Miss Marx, Cosmic Cube, Choice Words, Less Is More and Prince Cheri. David has also maintained an excellent strike rate.
Lamasery was his first horse, since returning to training, who was purchased for $10,000 by his friends Sam and Mel Mayer. The gelding notched up 11 wins from 25 starts to earn $630,450 in prize money. He won four Stakes races including his gallant victory in the Group 2 Hill Stakes at Randwick.
David also has a good history of improving tried horses. The trainer’s results come from a deep understanding of each horse as an individual, combined with dedication and planning.
“He cares for and knows his horses backwards, the characteristics and idiosyncrasies of every thoroughbred under his care. He is as good as any horse whisper that you can get,” Mr Kevin Maloney, Segenhoe.
Part owner of Less Is More, Jocelyn May, who has been involved in the racing industry for almost 50 years – first riding track and later as a breeder and owner, said that David has a genuine love of the horses he trains and a passion for getting them to reach their full potential.
“I’ve come across dozens of trainers; some good, some bad and some brilliant. David Vandyke falls into the latter category,” said Mrs May.
Where it all began
The success of David’s career is built upon a strong foundation of working through every facet of the breeding and horseracing industry, locally and internationally.
He started as a trainer at Kembla Grange at 21 years-of-age where he won the local Training Premiership in 1989 as a 23-year-old. This title was under his original name of David Hayes, he changed his surname to his mother’s maiden name Vandyke in 2010 to avoid confusion with fellow trainer David Hayes, son of Colin Hayes.
David’s interest in thoroughbred racing was sparked as a young boy through his family’s breeding and racing interests. After attending Scots College, Sydney, he learnt his craft by working with leading Randwick trainers Neville Begg and Les Bridge. He also worked in Japan for 12 months, Churchill Downs (Kentucky) and in New Zealand for Graeme Rogerson and Laurie Laxon.
David is also a skilled horse-breaker. He cultivated these skills as a stud hand at Segenhoe Stud and Roseneath Stud. After leaving his first stint as a trainer he was responsible for horse breaking at Itsuwa Farm, Hokkaido, Japan in the early 1990s.
Upon his return to Australia, David helped his friend Tim Martin establish his stable at Rosehill before working with Sydney’s leading trainer Chris Waller for 3 years as his Office Manager.
After leaving Chris Waller he started his own successful business, Animalcare, with Dr Tim Roberts, supplying animal healthcare products. Four years into the business, his innate desire to train could no longer be ignored.