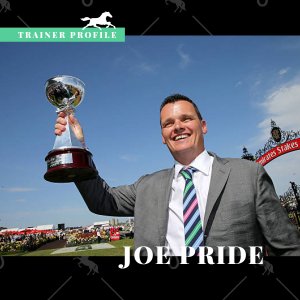 Ambition to succeed and an exceptional work ethic have been the key to Joe Pride’s achievements; there were no family foot steps to follow in, he has forged his own legacy from the ground up. Initially studying psychology at Sydney University Joe’s his passion for horse racing sky rocketed his career into dizzy heights, and not even Joe himself could have predicted the success he would experience when he opened his small stable at Royal Randwick in 2000. Joe’s swift rise to the top of Sydney’s training ranks can be attributed to a number of factors, but none more so than the early influence of John Size. Joe spent four years with John at Randwick before being given a once in a lifetime opportunity when John left for Hong Kong and helped him establish a stable stable of his own, ultimately providing the platform from which his career would later flourish.

Joe made the move to Warwick Farm and with the excellent facilities on hand he firmly believes it is here that he can train each horse to their full potential. Joe has a reputation for rejuvenating older horses, most notably dual-Group I winner Vision And Power. The son of Carnegie arrived at Joe’s stables with a record of 19 starts for one win and was coming off a 30 length defeat in a hurdle trial.

Joe credits much of his ability to do so to mentor Size. “It was a strength of his and the way I train horses seems to suit the older ones. I can’t change their ability, but I can get them to perform at a level that they’ve always had but maybe not always shown. And I get a lot of enjoyment out of it.”

Those familiar with the remarkable Vision And Power story will recall his back-to-back Group 1 victories in the George Ryder Stakes and Doncaster Mile only 18 months apart. The Group one wins were the horse’s ninth and tenth run of a preparation that yielded a staggering $1.7 million prizemoney for his owners.

Joe completed the 2017/18 season in 9th position on the Metropolitan NSW training Premiership ladder behind Sydney’s mega stables, and hasn’t been seen out of the top 10 in the past decade. He and his team at Warwick Farm are more than looking forward to the season ahead.