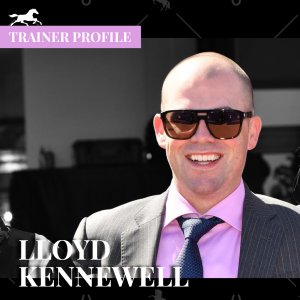 After completing his tertiary education at Pulteney Grammar in 2000, there was little doubt about the career that Lloyd Kennewell would pursue. He’d grown up around racehorses at his father Gary’s stables and was an odds on favourite to follow his dad into the racing game.

Having seen first hand the growing level of professionalism needed to run a city stable, Lloyd embarked on a Business Management Course at TAFE SA and completed his studies with great commendation from his tutors which set him in great stead to run his own business.

In late 2003 Lloyd applied for his training licence and made history as the youngest recipient of a licence in South Australia at age 21. He trained his first winner soon after when Treasure Time scored at Cheltenham in February 2004.

After enjoying great success training out of Adelaide, including noteworthy wins in the 2017 Group One Winterbottom Stakes in Perth and the 2012 Group Two Adelaide Cup, Lloyd made the bold move to Melbourne in 2018 and set up his new full time base at Caulfield and just weeks after arriving the stable cemented their spot in the state with a Group One win in the 2018 Moir Stakes with Viddora.

One that has never been afraid of a challenge or to travel his horses whether it be in Australia or overseas, Lloyd decided to take on the world and Viddora raced on the biggest stage at the Dubai World Cup meeting in 2019, finishing fourth in the Group One Al Quoz Sprint. The star mare then raced in Hong Kong before being retired to stud.

Prominent at all major sales both in Australia and overseas and with an eye for a yearling, a terrific winning record, and knowledge beyond his years, the future is bright for Lloyd Kennewell.