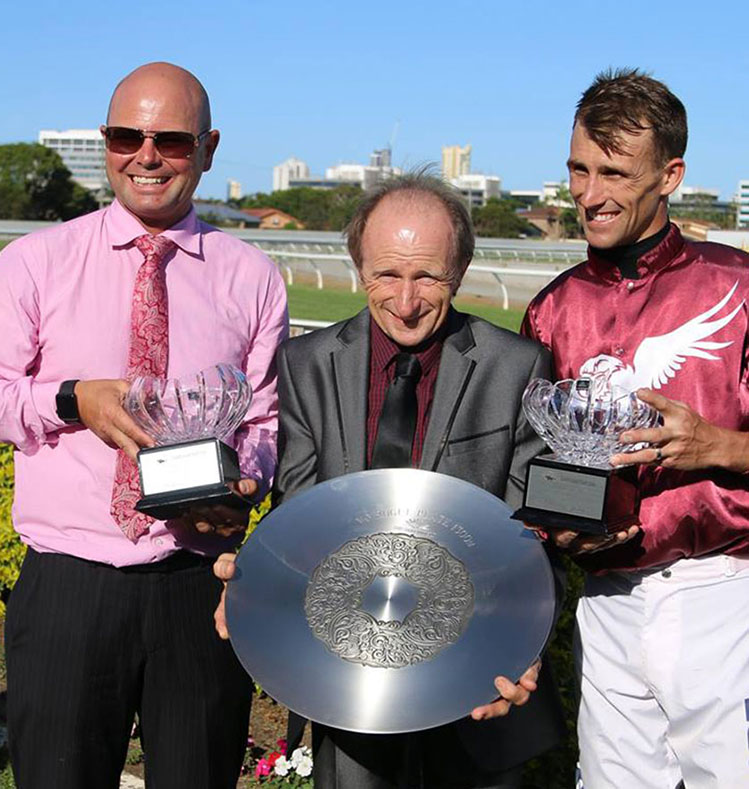 “I rode for about six years before I started training. I guess the training aspect was much a natural progression from a too heavy jockey to a race horse trainer.

“I rode in Sydney for a short time, mostly the mid-north coast. I was limited in ability a rider, and rising weight made opportunities less and less frequent as time went on. At that time I had no real intention to train ever.

“When I finished riding I looked for a few other things to do. I went back to school and did my HSC to try to maybe go to Uni, but racing was in my blood and hard to walk away from.

“I got acquired of horses and started training. I was only about twenty then and got my stable numbers up to about ten or so in Port Macquarie. Being a young trainer in the country is extremely difficult financially and I was finding it hard to make ends meet so i decided to pull the plug and go to work for my father. He had an earth-moving business in Sydney. I worked for him for a couple of years and then decided it was time to try training again and I came up to the Gold Coast.

“I trained there for probably about five years and then Gerald Ryan asked me to go and run his Sydney stable … his main stable was up here at the time.

The way things were structured down there, I was quite heavily involved in the management of all aspects of the stable, the way horses were placed and yearling purchases. It was absolutely priceless getting that sort of experience. It was exactly the type of education I was looking for.

“I think you need that experience. I think lots of people can train horses and train them well, but you need to go to a big stable to learn how to train lots of them. It can be difficult get to that next step by taking on a large number of horses … that’s where many trainers falter because they don’t have that experience.

“You go from ten horses … to fifteen … to ‘where do I go from here’? Whereas, if you can walk into a stable where you are training between sixty and seventy horses every day of the week, it becomes a very valuable experience. And then you also have the benefit of exposure to better horses and better clients. You cannot put a value on the contacts you make where you are in that position.

“Everybody has their own idea on how horses should be trained or worked, which is a good thing otherwise it would all be too mechanical. Gerald is a very good trainer. He has been around a long time and he’s had a large number of good winners and good horses, so it turned out to be a pretty important part of my career.

“On the one hand you know consciously that you are learning on certain days. At other times you think, as time goes on, that you are just through the motions everyday of getting the job done … but you don’t really realise how much knowledge you are picking up.

“I think training is something you either do one hundred and fifty percent … or forget it. You know, you can either have a really good go at it or you can just stand and watch. Most people who take that latter option and fail.

“Any business … it all begins with hard work. Beyond that, it’s all a test of character. You know adversity will come your way in one form or another … a quality horse will break down, the weather will test your patience often.

“It’s a tough game, but in saying that, it’s a pretty good life if you can survive. It’s a unique business. You either love it or hate it I suppose. It is a difficult game to get out of once you have been in it for a while though. Then you are probably in it for life.

“You see, even sometimes high profile people walk away and say they’ve had enough. Then next time you look they are back.

“The stable developed to the stage where we were running fourth in fifth in the premiership in Sydney. It was really successful and we had some really good horses come through … and financially it was good too. I was pretty well looked after when I was doing that.

“That then flowed on to what we set up here together. When we came to Murwillumbah, it was considered a strange choice of location in many people’s minds.

“Originally we planned to keep the numbers at Murwillumbah to about ten … and just have something that was as far different as the Sydney stable as we could possibly have. We could have gone to the Gold Coast or Eagle Farm but then we would have just have been duplicating what we already doing.

“I wanted to do something different. Gerald had no need for a satellite stable, basically ran with the idea due to the fact he was a close friend and wanted to reward the effort I had put into the Sydney stable right through the eight years I spent there.“Our biggest concern when we went to Murwillumbah was, where were we going to find staff? Our employees are one of our biggest assets.

“All the people who work for us now are all local people. We didn’t bring any staff up from Sydney. None of them had real racing backgrounds either. That was positive in that we could train them from scratch … and that’s where my experience of running a big stable kicked in and it has served me well since.

“Gerald and I had good success with medium numbers. I then took out a trainer’s license in my own right and it just evolved into what it is now. 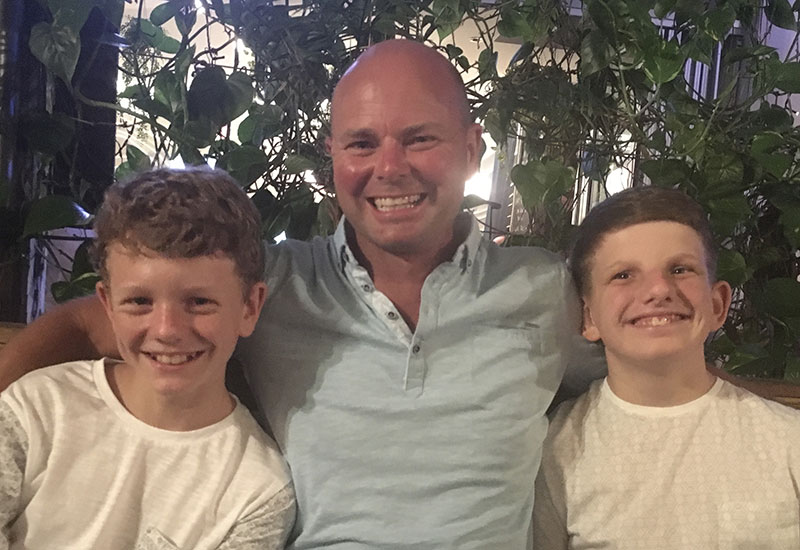 In 2011 after holding my own trainers license for approximately six months my wife Keira and I decided to purchase the larger block and construct an extra fifty boxes to cope with our growing team, a nervous choice at the time but has turned out to be our best move.

“Our stable is located across the road from Tweed River Jockey Club. Facilities are top grade, two grass tracks and an all weather sand track. The biggest upside to being based where we are is the low horse volumes using the track. I have seventy five horses in work, which make up the vast majority, of the ninety horses in total being trained here.

“For us, it is almost like having a private track … and the club always tries to help.

“We’ve also got the beach. It’s not very far away. I take all my horses to the beach at some point, never for gallop work, we use it purely for therapeutic reasons for horses mind and body. Once horses become accustomed to the beach and water they absolutely love going for a trot up the sand dunes or walking in chest deep water as the waves gently wash over them.

“We got lots of new horses and lots of new clients. I mean our client base is probably about five hundred now. That’s a good number … and you need it too in order to sustain things and keep things rolling.

“My good friend Neil Jenkinson, who is a bloodstock agent, has helped me a lot with yearling selection and purchasing. I have great faith in Neil and between us I believe we buy very nice horses, most importantly at the right price. 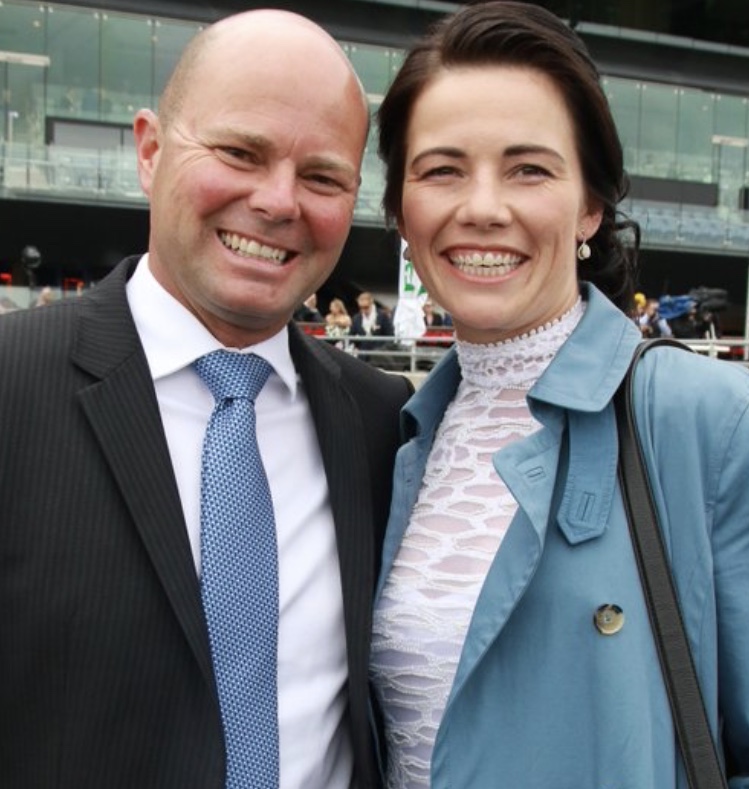 “She’s always happy to do whatever it takes to get the job done. She’s fantastic.

“I think we were lucky in a way in that we were able to build our stable gradually from the bottom up on our own terms.

“We came here with two horses four years ago and it has gradually got to where it is now. Because of that, we’ve been able to manage our staff, manage our client base and let things slowly develop.

“It’s probably happened through good fortune as much as anything. Whatever way it has come about, it has been great.

“We’ve been approached to move to different places, but what we have established is a unique set-up and many owners find our set-back to be an attractive option.

“That uniqueness is one of our main selling points I guess. Why would we change something that is working so well?