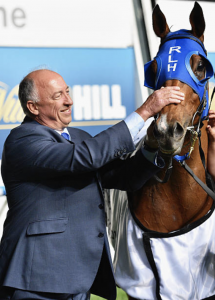 Robert Heathcote, one of ten children growing up in Launceston, Tasmania, came from a non-racing background where his early career choices could not have been any further from Horse Racing. He began his working life with the Examiner newspaper as a Photo Engraver. Upon completion of his indentures, he embarked on an overseas ‘adventure’ to Europe.

Rob was to spend the next fifteen years travelling extensively all over the world working initially with Contiki Tours as a Guide and a Tour Manager with Industry Heavyweights Trafalgar Tours and Insight International Travel and he also managed a Ski Lodge in an Austrian Ski resort for several winter seasons. 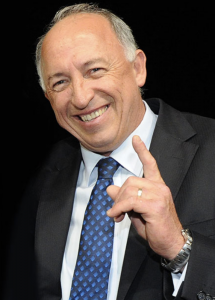 Robs first introduction to the world of Thoroughbred Racing was visiting the many racetracks of England where he worked with his brother, Wayne. He got to witness some of the worlds finest horse flesh including the great, Danehill race.

Rob then decided to move back to Australia to settle down closer to home and start a family and decided on Brisbane due to the nice climate. His brother had a number of horses in training with many of the leading trainers and Rob became his racing manager working with the trainers and liaising with his brother on their progress and race planning.

Whilst initially hesitant to take up the challenge of training racehorses with his limited knowledge, it was a challenge he was not to turn away from and he would throw himself into the task, absorbing as much information as he could in the early years. Robert was granted his racehorse trainer’s license in 1997 and he applied his life skills and common sense to finish sixth in the Premiership in his first year with only a small team of racehorses. Ever willi 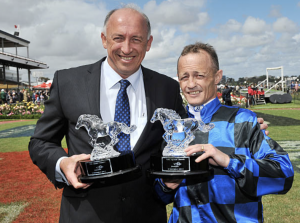 ng to learn and improve his skills, he sought advice from some of the industry greats in Eric Kirwan and the late Bruce McLachlan. “I made some mistakes, but I was very careful not to make them again and to learn from them” he says!

Over the next 20 years Rob has trained over a 1000 winners and has been named the Queensland Trainer of the year on several occasions to go with his 5 metro premiership titles and last year’s State Training Premiership. The current racing season has seen him win another Group one win in the time honoured Moir Stakes at the Valley with a thrilling win over Lankan Rupee. The coveted group 1 tally now sits on an impressive 11 with Buffering the stable star with 7 to his name to date.

Robert is married to Vicky, they have two children, Nicholas and Charmaine.

Rob believes that owners are the most important people in racing, some he has had from the first year he started training, a testament to his great communication, regular updates and his very approachable personality that makes owners feel like part of the ‘racing family’.