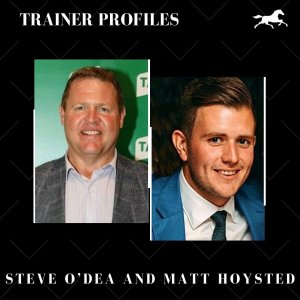 Steve O’Dea, the son of North Queensland trainer Graham O’Dea, has had a long standing affiliation with horses. After initially enrolling in a Bachelor of Economics, it was not long before Steve realized his career belonged in the racing industry.

His passion for racing took him to leading trainers Gai Waterhouse, Gillian Heinrich, Alan Bailey and Kevin Moses. After four years of apprenticeship, Steve returned to North Queensland to take over from his father who was retiring. In his first season, Steve achieved a 20% runners to winners strike rate.

As his stable grew, Steve sought to relocate and make the move to Brisbane. A number of successful hit and run missions encouraged Steve to make the bold decision. He has since built up one of the bigger stables at Eagle Farm and established himself as one of the state’s premier trainers.

In October 2020, Steve went into a training partnership with his assistant of four years Matt Hoysted.

Matt comes from a horse racing family rich in tradition. He grew up in Wangaratta before moving to Melbourne when he was 13 years old. Having a father as a trainer, Matt grew up in the stables, so it was no surprise that his first job upon moving to Melbourne was for Lloyd Williams at his Flemington stables with his uncle, Robert Hickmott, who was then stable foreman.

During his four years there, the stable transitioned to the world class training establishment Macedon Lodge. In that time Matt was able to work around champions like Efficient, Gallic and Zipping. Matt was then offered a position to work for Michael Moroney at his Flemington stable.

He was there for five years and assistant trainer for three of those. In that time the stable had Group 1 winners Brazilian Pulse, Monaco Consul and Glass Harmonium. At the end of 2014 Matt made the move to Brisbane where he worked under leading Brisbane trainer Tony Gollan for 18 months before being offered the assistant trainer role with Steven O’Dea.