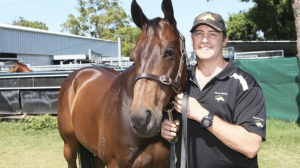 Rugby League football played an important role in Tony Gollan’s life but, the love of racehorses and all things racing was always close. When Tony completed his schooling at St Mary’s college in Toowoomba, where two of his fellow students were the late Stathi Katsidis and now Racing Queensland’s Limited Chairman of Stewards Wade Birch, he contemplated a full time pursuit of football.

Tony was a Queensland Under 19 representative but, he also had close ties to the stable run by his father Darryl while he was growing up. He has always been a keen follower of form and Tony and footy mates would often get to Clifford Park races after a match. Despite some words of warning from his Dad, Tony took out a trainer’s licence when he was 20. He had a team of four horses and the confidence of youth, but reality soon bit. “I thought the first horse I saddled was a certainty in a race at Wandoan and bet accordingly. The horse ran off the track at the home turn and was beaten. I was crushed and soon realised the training caper was a lot tougher than I’d first thought,” Tony recalled. 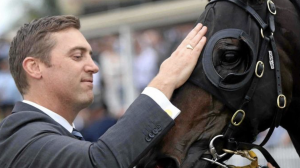 Tony’s first winner was Carbon Shadow at Clifford Park. Katsidis, who had become a close mate as well as a regular rider for Tony, was aboard when the young Toowoomba trainer secured his first metropolitan winner with Nova Serrure. At 22, Tony, let his natural ambitious instincts rule his head and he set up a stable in Brisbane. He enjoyed some early success and soon had a stable of 14 horses but, he was advised his visitor’s permit had elapsed and he could no longer train at Eagle Farm. Tony made the decision to set up base at the Gold Coast. After six months, a chastened Tony realised he was in a downward spiral. He headed back to Toowoomba and renewed his close ties to Darryl. He spent the next year soaking up as much knowledge as he could from his father; and also very close observations of the way legendary trainer Jim Atkins prepared his team and how he ran his stable. It was an invaluable learning curve.

Tony revived his own training business in 2003. A stroke of good fortune gave his return some early momentum. Eureka Stud father-son combination, Colin and Scott McAlpine, gave him a Special Dane filly which they named Temple Spirit. The filly was a great success on the track, winning eight races. The association with Temple Spirit has continued with Gollan Racing, with the team enjoying tremendous success with of the mare’s foal Spirit Of Boom and Temple Of Boom. The latter lifted Tony’s profile on to the big stage when he won a Listed Race at Flemington on Oaks day in 2010. It also whet his appetite for the major carnivals. “It was an incredible buzz just to have a runner at Flemington in Cup week. It’s addictive. I want to get myself to a stage when I can travel to those big carnivals regularly,” he said. 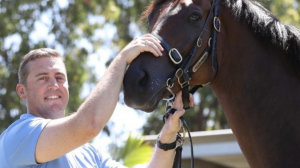 The team at Gollan Racing pride themselves on being a family run business that provides a wonderful, positive working environment for their staff and horses. The close-knit team of 25 staff work extremely hard and their ability to gel as a team continues to see that hard work rewarded, with Tony’s great training successes testament to this.

“It’s been said a horse trainer has to excel at people skills, time management, communication, media presentation, team building, anger control, accountancy and forward planning. Along the way the trainer has to find the necessary time to spend with his core issue – the racehorses under his care. Gollan is already proficient at all the above. His progression as a trainer in the past two years in particular has been fascinating to observe.” – Bart Sinclair, Turf Editor The Courier Mail and Sunday Mail.

Tony Gollan has achieved the feat of winning the Metropolitan Queensland Trainers’ Premiership for 5 seasons in a row and currently holds the record of Metro wins breaking his own record in the 2017/18 season previously set in 2015/16.

Gollan is quick to point out the fantastic team of people that helped make the stable tick, as team Gollan looks to continue its success heading into each new racing season.

“I’m blessed to have the support from some really, really good clients and I’ve got some really good staff and my family around me,” said Gollan. I’m just a very lucky bloke who’s getting the limelight for training winners, but there’s a big team behind me. We want to be strong here again next season, we have got 91 boxes in the stables here at Eagle Farm and each year we aim to be better than the last. We want to continue to be a strong force here in Queensland for another season and hopefully we can do that.”