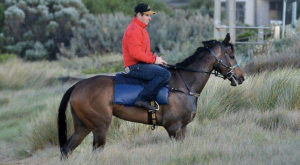 Will Clarken comes from a family steeped in racing. He is the fifth of the clan to be a successful jockey. In each of his two years as an apprentice he won the Best Apprentice award; but with growth came the inevitable increase in weight which ended his time as a jockey but led to a new career in horse education.

For three years Will managed Performance Park, the Macclesfield property in the Adelaide Hills, established and owned by Mike Nunan. There Will’s own education in training benefitted greatly from Mike’s application of advanced scientific methods, including equine heart monitoring, lactate analysis, and the use of treadmills. The farm educated over 80 yearlings in the three year period under Will’s management, including the Group 1 winner Happy Trails, and several other stakes placed horses. While at Performance Park Will gained his permit to train and had success with Morphettville winners including More Allowance, Noble Connection, Mill’s Terrace and Cruising Eagle.

With the growing success at Performance Park Will expanded his operations with a move to Morphettville in 2012. He has had consistent success since the move and has always maintained city grade winners in his care. Highlights of Will’s training career include Group 3 Sires Produce winner, Molto Bene, Listed winners Addiction to Rock and Cavaloce, and metropolitan Saturday Melbourne winners Dee Bee Nine and Slim Henry and Port Lincoln Cup winner Tidy Prophet.

Will’s success comes from both identifying young stock at the yearlings sales and also sourcing tried horses with capacity for improvement which he has gone on to capitalise on. These combine to ensure Will’s stable consists of only metropolitan grade horses or those showing potential and he therefore goes out of his way to be honest with his owners.

Will Clarken is the new breed of horse trainer who is prepared to embrace innovation in the competitive world of racing.