Don’t let the laid-back demeanour fool you, under those curly locks lies a fierce will to purchase, train and race the best horses in the country. Since joining the team in mid-2016, David’s thoroughness and meticulous attention to detail complements Ciaron’s unique style.

From six boxes on his dad’s dairy farm to one of the best training facilities in the world, Ciaron Maher has come a long way in ten years. 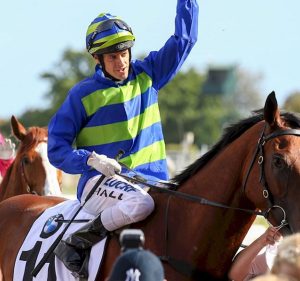 Ciaron’s early promise as a jockey was ended because he grew too big but not before he had led the Australian Jockeys team against the Irish in the International Challenge. His size could not stop or diminish his love of horse racing and so he threw all his energy, enthusiasm and intelligence into becoming a trainer.

From CS Hayes to Bart Cummings, from Aidan O’Brien to Willie Mullins – he studied under the best and took aspects of training from them all and moulded them into his own unique method.

Ciaron firmly believes you only get better by learning from the best and recently spent time with Wesley Ward (USA), Roger Charlton and Richard Hannon (UK), Joseph 0’Brien (IRE) and André Fabre (France).

The opportunities to acquire Peter Moody’s and Darren Weir’s stables were too good to miss and because Ciaron always had a plan, both operations were smoothly absorbed. This was achieved by the combination of the brilliant young team of highly intelligent and outstanding horsemen and women who have been trained in his methods and the excellent personnel already operating in those two stables.

With the Ballarat training facilities (that he believes to be amongst the best in the world). Satellites at Caulfield and Sydney. A custom-made pre-training and spelling operation at Pakenham and hand-picked beach facilities at Balnarring, he truly believes he has the team and the facilities to be among – if not the – best training operations in Australia.

And we have only just begun…