Mathew Ellerton’s quiet demeanour hides a passionate, talented horseman who has devoted his energy to getting the best out of every horse he lays his hands on.

He doesn’t say much. He doesn’t have to. Ellerton’s career to date can speak volumes for him.

A childhood friend, who was a jockey, introduced Mathew to racing but it didn’t take long for preparing racehorses to become a passion for him.

Following his heart, he commenced his racing career in 1998, working for owner David Moodie at Hobsons Lodge.

A series of events led to Moodie appointing Mathew to take the role of head trainer. Moodie believed in Ellerton’s abilities, quoting him as “a gun”, a title the young trainer quickly proved correct.

The early years with Hobsons Lodge were an amazing time for Ellerton, who produced many outstanding training efforts to resurrect and continue the career of the outstanding racehorse Casual Pass, who had been written off as a racing proposition.

Ellerton racked up wins in some of Australia’s biggest races, including a Blue Diamond Stakes win with Paint, an Oakleigh Plate triumph with Miss Kournikova and VRC Sires’ Produce Stakes win with Spectatorial but top performers Black Bean and Sunburnt Land also passed through Hobsons Lodge. 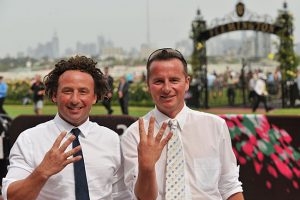 In May 2009, Ellerton moved from Hobsons Lodge in Kensington, to Flemington Racecourse where he joined forces with fellow trainer Simon Zahra to form Ellerton Zahra Racing.

Ellerton and Zahra took out one of the world’s great races the next year when the brilliant filly Crystal Lily claimed the Golden Slipper, the world’s richest two-year-old race.

Ellerton and Zahra have also combined to win the 2018 VRC Oaks with Aristia while Booker gave the stable another Oakleigh Plate win in the same year. Response was another of the stable’s winners at the highest level when she won the Sir Rupert Clarke Stakes and Robert Sangster Classic during her brilliant career.

Mathew’s philosophy is to remain competitive. His training style is conservative and leans to the side of caution. He is a man of strong ethics and has a hands-on approach, ensuring the wellbeing of every horse in his care.

He has a natural gift in the evaluation of young horses, adjusting their training accordingly, and providing owners with honest and unbiased feedback.